“People with FSHD have told me that after watching my documentary about my family’s story, they don’t feel so alone.”

The stairway leading up to Lexi’s first floor apartment is steep, the wooden steps uneven and worn. She climbs step-by-step carefully, balancing herself despite the challenges created by her permanently arched back and weak legs. With each step forward, the leg behind her drags slowly up to find the next step. It’s a slow process, and when she reaches the top, she pauses for a moment, searches for her keys in her purse and smooths her sweater with her palms. She gathers herself. Lexi’s apartment, where she lives with her boyfriend, Dylan, is awash with light and decorated with impeccable attention to detail. “I created that piece when I was recovering from surgery,” she says, pointing to a three-dimensional recycled paper collage hanging on the wall that spells the word “love.” She had been trapped inside all summer, three years ago, recovering from scapular fusion surgery that would provide her more mobility in her arm and pull her scapula in toward her spine. “I didn’t want to just sit around feeling bad for myself, so I got creative.”

This positive attitude is what has guided Lexi throughout her challenges with  facioscapulohumeral muscular dystrophy (FSHD), a rare and potentially debilitating disease characterized by progressive skeletal muscle loss. Growing up, Lexi watched her mother, maternal uncle, and grandfather struggle and overcome the challenges of living with FSHD.  She was unaware that she, too, had the genetic mutation. Back then, she never gave a thought to accomplishing simple tasks like climbing stairs. She had been a competitive athlete, especially in gymnastics, where she had progressed steadily up through multiple skill levels over the course of nine years. The first time she noticed physical differences between herself and her peers occurred during practice with her teammates at the age of 10. “I wasn’t advancing as fast as other girls,” she says. “I could do front and back flips and aerials, but I couldn’t pull myself up on the bars as well as other girls. There was a certain movement required on the bars that would advance me to the next level and I couldn’t do it.” Lexi’s mother, watching from the sidelines, knew intuitively what was going on, but chose not to share her hunch with Lexi until the changes in Lexi’s body were more noticeable. Frustrated with the standstill in her progress, Lexi quit gymnastics and chose to focus on other sports such as lacrosse and track, following in the steps of her older sister.

Back then, she never gave a thought to accomplishing simple tasks like climbing stairs.

While these new endeavors seemed to fulfill her innate desire to move her body and compete, they became sources of frustration as well. “In eighth grade, I wasn’t running as fast as other girls, but at least I was still able to run. By high school, even field hockey was hard. I couldn’t run and I couldn’t bend over and hold the stick as well as I needed to.” During this time, Lexi slowly became aware that she had FSHD. “I don’t remember when I found out I had it, but I wasn’t surprised because so many people in the family had it.” Like background noise, FSHD was ever-present in Lexi’s mom’s side of the family, but never viewed as something very disruptive. “My mother didn’t have it severely when I was growing up. She says it didn’t impact her much until she had children.” The only physical symptom Lexi saw in her mom were her “winged” scapulae, her pronounced and protruding shoulder blades.

Lexi stretches her arm to the side and points to her own shoulder blades. She jokes about how her “chicken wings” used to poke out. As an adult, she elected to have surgeries that attached each scapula to her rib cage with wire, allowing the bones to fuse over time. The recoveries were long and painful and required physical therapy for five months, but Lexi says the surgeries were worth it. Not only did she regain range of motion and strength in her arms, the surgeries rid her of the “chicken wings,” which had become a major source of self-consciousness for Lexi from high school through adulthood. “I used to wear very particular shirts and hold my arms in certain positions in order to hide my winged shoulder blades. It’s a relief not to have to do that anymore.”

In middle school and high school, this self-consciousness was a heavy cloud that followed her into every social situation––school, sports teams, walking around the neighborhood. Did people have to stare? What were they saying behind her back? The progression of her illness was such that the winged scapulae were followed by leg weakness and eventually, later in high school, an arched back. She didn’t talk about FSHD, except with a few close friends, until she took a class in high school about writing memoirs. In this class, she began to wonder what it would be like to write her story—to tell the story of her disability and to share it in a public forum. She felt nervous about how the story would be received. Her thoughts turned to her grandfather, a man whom she loved dearly and admired greatly. He was an anesthesiologist who had become very involved in the FSHD Society (then the FSH Society), speaking openly about his disorder and helping others with FSHD find community. He was her role model and inspiration. She wrote her story and read it out loud to the class. It was very well-received.

A door had opened. Lexi found the experience of storytelling powerful and intellectually engaging. She recalled the stories she told in childhood––she had made silly movies with friends, dressing up as characters and performing scenes. The memoir class inspired her to think about combining personal stories with film––what would it be like to create a documentary telling the story of FSHD in her family? She dreamt about interviewing her relatives, all with the same genetic mutation, but with individual and interwoven experiences. At the beginning of college, she began her project. “My goal was for my film to spread awareness. There wasn’t much out there that told people’s stories of living with FSHD.” Lexi interviewed, filmed, edited, and produced the documentary herself. It took several years.

A door had opened. Lexi found the experience of storytelling powerful and intellectually engaging. 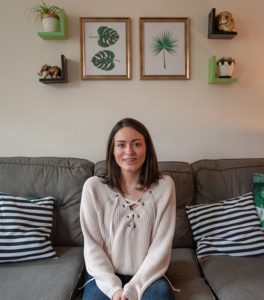 In the movie, her family members open up about noticing their first symptoms and how their muscles have degenerated over time, leaving them with a variety of physical limitations. Lexi, her mother, maternal grandfather and maternal uncle share the same gene, but the gene is expressed in differing levels of severity, with Lexi experiencing the most physical challenges. The film, which is simultaneously tender and inspiring, portrays a family whose openness about their condition speaks to the supportive nature of their relationships with one another. “When I finished in 2016, I posted it online.” The edges of her lips curl up in a slight smile when she describes the film’s success. “It now has over 40,000 views.” Lexi notes that the film is especially helpful for newly diagnosed people to get information and perspective. “People have told me that after seeing my film about FSHD, they don’t feel so alone.” This impact is something her grandfather would have been proud to see. Although he is featured in the film, he passed away at the age of 87 before it was completed. Lexi’s film, “Growing Up with FSHD,” can be viewed online here.

Storytelling through film grew into a passion for Lexi. She pursued it as a career and currently works for a corporation doing video production and editing from home. “The lifestyle fits well for my disability. I don’t have to walk anywhere, and I don’t have to lift anything.” She is currently producing a series of short biographical documentaries about people within the company. Occasionally the job asks her to be involved in filming, which requires her to stand for a few hours at a time. “Standing is really hard and painful for me, but anything I can do, I will do. Even if it’s hard.” She laughs at her boldness and determination. “I really shouldn’t be living in an apartment with so many stairs. And I probably should work out more at the gym.” Then, matter-of-factly, she adds, “I recently went skiing for the first time in eight years. And I probably shouldn’t have done that either, but I loved it.” She smiles comfortably, stands up, walks to the kitchen, and heats up some water for tea. “I try to do what I can,” she says. “I try to live.”